It is crucial for NPs to have a working knowledge of the clinical presentation of tick-borne illnesses at various stages and the diagnostic testing and treatment guidelines recommended for best outcomes.

Though there are many tick-borne illnesses in the United States, reported cases of Lyme disease, spotted fever rickettsiosis (including Rocky Mountain spotted fever), and Powassan virus disease in particular have steadily increased (CDC).

Lyme disease is the most common vector-borne disease in the United States. It is caused by the bacterium Borrelia burgdorferi and rarely, Borrelia mayonii, and is transmitted to humans through the bite of infected black-legged ticks. Typical symptoms include fever, headache, fatigue, and the classic erythema migrans rash. If left untreated, the infection can spread to joints, the heart, and the nervous system (CDC).

Blacklegged ticks that carry Lyme disease primarily live in the Northeast, Midwest and Mid-Atlantic states and along the West Coast, so patients in these locations are at a higher risk. And because ticks tend to inhabit wooded areas, those who spend more time outdoors in the spring and summer are more likely to contract the disease. If the tick is not discovered and removed by the patient within 24 hours, their risk of contraction increases. 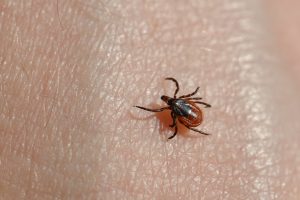 Rocky Mountain spotted fever (RMSF) is a potentially deadly bacterial disease spread through the bite of an infected tick and is seen only in the Western Hemisphere. Common symptoms include fever, headache, myalgias, and a rash on the palms and soles. The rash will initially consist of small, flat, pink macules that will eventually progress to dark, raised papules. The lesions may develop petechiae. NPs should ask about the history of possible exposure to ticks, as an actual bite may have gone unnoticed (CDC). 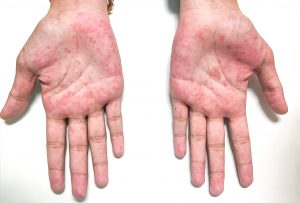 Less commonly known, Powassan virus can be extremely dangerous as many people infected do not have symptoms. Even for those experiencing symptoms, onset can range from one week to one month from the time of tick bite. Initial symptoms can include fever, headache, vomiting, and weakness. In severe cases, Powassan virus can cause encephalitis or meningitis. Powassan is deadly 10% of the time and 50% of those who survive have long-term sequelae (CDC). It is most commonly found in the northeast and upper midwest states.

To learn which ticks are prevalent in your geographic location, consult the CDC’s resource here.

As the most common and widely recognized of the tick-borne illnesses, Lyme Disease will be discussed further below.

When concerned about Lyme Disease, the NP should ask the patient about the likelihood of exposure to ticks, such as recent time spent in wooded areas, travel to affected areas, or if their pets recently had tick bites. The type and timing of symptoms matters as well. There are three stages of Lyme Disease and the symptoms of these stages may overlap or some patients may not experience all three stages. 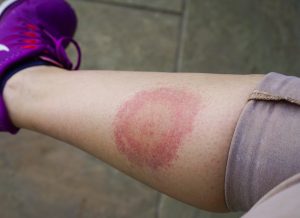 The Early Localized Lyme disease stage occurs 1-4 weeks after transmission. patients will commonly complain about flu-like symptoms, including fever, headaches and myalgia, as well as and swollen joints–particularly knees. They may also show general symptoms like chills, fatigue, and swollen lymph nodes. In most cases of Lyme, Erythema migrans (EM) appears as a red macule at the tick bite location and increases in size. 33% of EM lesions develop a central clearing, resembling a bullseye. The lesion may not be a perfect circle, may be warm and painful, and the center could be vesicular, pustular, or necrotic. Most Lyme-related lesions reach a diameter of 5 cm or more and appear one week after the bite (Rebman and Aucott). 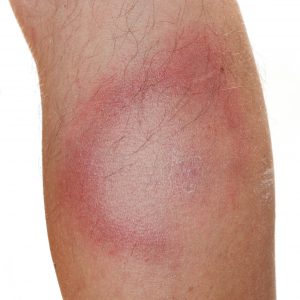 If Early Localized Lyme disease goes untreated, the infection can spread through the bloodstream and lymphatic system to the patient’s joints, nervous system, or cardiovascular system. As it spreads, symptoms will worsen and affect more parts of the body over the course of 1-3 months, becoming what is known as Early Disseminated Lyme disease (Bamm et al.).

If still unrecognized and untreated for more than 4 months, the disease progresses to Late Lyme disease. Symptoms of Late Lyme disease may include: arthritis, numbness and tingling in the hands, feet, or back, extreme fatigue, poor control of facial muscles, problems with memory, mood, or sleep, and sometimes problems speaking, and in some cases, irregular heart rhythms.

The non-specific symptoms of Lyme Disease may make differentiating it from other illnesses difficult, especially if a tick bite was undetected or the erythema migrans rash misidentified. However, in symptomatic patients with a history of possible tick exposure (hiking, camping, other outdoor activities) or a rapidly appearing and long lasting rash, further testing for Lyme Disease should be considered. Isolating B. burgdorferi via culture or detecting serum antigens has proven difficult and unreliable for diagnosis, therefore current recommendation for diagnosis is a two step process to detect serum antibodies (Murray & Shapiro, 2010).

The first test is an enzyme-linked immunosorbent assay (ELISA), which is a highly sensitive but not very specific test used to screen for the presence of antibodies against B. burgdorferi. If this test is negative, no further action is needed. If it is positive, a more specific Western Blot is indicated to assess for the presence of antibody “bands” against specific proteins of B. burgdorferi (this can all be done from the same blood sample). In patients with symptoms for less than a month, both IgM and IgG should be evaluated, with 2 of 3 possible bands indicating a positive result. In patients with symptoms lasting longer than one month, only IgG is important, with 5 out of 10 bands indicating disease (Murray & Shapiro, 2010). 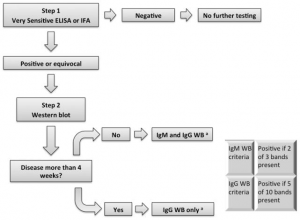 When used as recommended, this two step process is relatively helpful in diagnosing Lyme Disease, particularly in later stages, however there are potential problems to consider. False positive results are possible, as there may be some cross sensitivity with other antigens. More commonly, a false negative result will occur as the level of antibodies builds over time and may be too minimal to detect in early disease. Because of this, treatment should be started immediately for patients in which there is a strong suspicion of tick-borne illness and providers should not delay treatment while awaiting the appearance of a rash or confirmatory lab results (Marques, 2015).

The Infectious Disease Society of America has guidelines in place for treatment of Lyme Disease based on timing since symptom onset and severity of symptoms. Both Early Localized disease (characterized by EM rash) and Early Disseminated disease (including cranial nerve involvement or carditis) can typically be treated with 14 days of oral doxycycline or amoxicillin. Cefuroxime can be used in patients with allergy to first line treatment. Azithromycin can also be considered for patients with doxycycline or amoxicillin allergy but has been shown to be less effective (Wormser et al, 2006).

Late Stage disease may respond well to oral antibiotics as well, but for more serious symptoms requiring hospitalization (such as meningitis or complete heart block), intravenous antibiotics may be needed, most commonly ceftriaxone (Wormser et al, 2006).